Sri Lanka trailing by 316-run against Zimbabwe on Day 2 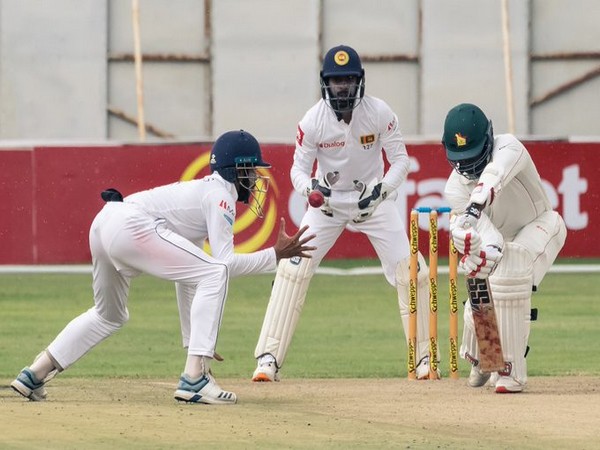 Harare [Zimbabwe], Jan 20 (ANI): Sri Lanka were trailing by 316 runs on day two of the first Test against Zimbabwe at Harare Sports Club here on Monday.

After restricting the hosts at 358, Sri Lanka were at 42/1 at stumps. Skipper Dimuth Karunaratne and Kusal Mendis will resume their innings on day three from 12 and six runs respectively.
Oshada Fernando departed after scoring 21 runs and was bowled out by Donald Tiripano.
Earlier, the hosts resumed their innings from 189/2. Brendan Taylor became the first scalp of the day as he was found in front of the wickets by Suranga Lakmal.
Taylor scored 21 runs. Sean Williams joined Craig Ervine in the middle and stitched a brief stand of 39-run for the fourth wicket.
Williams was caught behind the stumps by Niroshan Dickwella off Lasith Embuldeniya. He added 18 runs to the scoreboard.
Ervine was bowled out by Lakmal after scoring 85 runs. Regis Chakabva (8), Kyle Jarvis (1), Ainsley Ndlovu (5), and Victor Nyauchi (11) failed to leave their impact on the scoreboard and were sent back to the pavilion cheaply.
Raza played an unbeaten knock of 44 runs which guided the side to 358 runs. Lasith Embuldeniya bagged five wickets while Lakmal picked three wickets. (ANI)