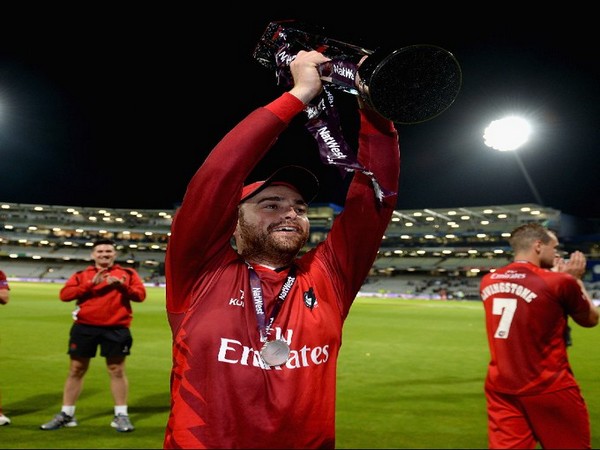 Lancashire [UK], November 27 (ANI): Lancashire Cricket on Friday confirmed that left-arm spinner Stephen Parry has left the club to pursue new opportunities after his contract expired at the end of the 2020 season.

Parry has enjoyed a distinguished career with the Red Rose since joining the club's Academy back in 2004 and was a regular feature in the side after making his first team debut three years later.
The 34-year-old made a total of 231 appearances across all formats for Lancashire but made his name in T20 cricket, in which he is currently the club's all-time leading wicket-taker with 117.
His performances with the white ball earned him international recognition for England - picking up a Man of the Match award on debut in an ODI against West Indies in 2014 - he went on to appear seven times across both white-ball formats.
"It has been an honour to represent this great club for such a long period of time. I am truly grateful to everybody at Emirates Old Trafford for their support since I very first walked through the doors. I started representing Lancashire at U10 level so to graduate through the Academy and play for the Red Rose for 16 years has been a dream come true," Parry said in a statement.
"I feel extremely lucky to have not only represented my boyhood to county but to have also tested myself on the international stage, which would not have been possible without the platform given to me by Lancashire.
"I am sad to be leaving behind a great dressing room - many who are now friends for life - and I wish nothing but the best for the Club as they move forward with an exciting, young squad," he added.
Parry was a key component of the Lancashire Lightning side which tasted Vitality Blast glory for the first time in 2015 - taking 25 wickets including four on Finals Day to help the Red Rose lift the trophy at Edgbaston. Parry also went on to play in the Big Bash in Australia for Brisbane Heat in 2015.
Ahead of the 2020 season, Parry signed a one-year extension with the club and was also awarded a Testimonial Year to recognise his outstanding service at Emirates Old Trafford.
Due to COVID-19, he has faced many challenges with his fundraising efforts for the Lancashire Cricket Foundation and Parkinson's UK. However, Lancashire Cricket has agreed to extend and support his Testimonial year further into 2021.
Parry will take up a coaching role within the Thunder set up at Emirates Old Trafford throughout the winter where he will work alongside newly-appointed head coach Paul Shaw and alongside the trio of spinners including Sophie Ecclestone, Alex Hartley and Olivia Thomas as part of their development.
The left-armer will also join Lancashire Leagues' Lowerhouse Cricket Club as their professional player for the 2021 season. (ANI)