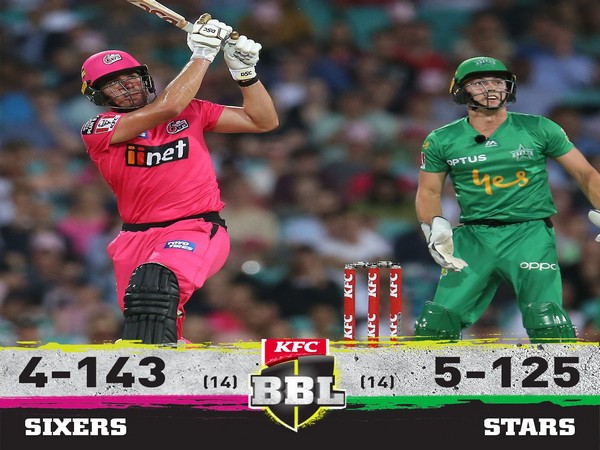 The match was reduced to a 14-over a side game after rain played a spoilsport. Sydney sixers made 143 runs in 14 overs but the target was revised to 147.
Chasing 147, Marcus Stoinis and Hilton Cartwright kicked off the Stars' run chase well as the duo scored 35 runs in three overs. However, Sixers struck as Ben Dwarshuis dismissed Cartwright in the fourth over, reducing the side to 35/1.
Stoinis looked in good touch and kept smashing bowlers out of the park. Nic Maddinson joined Stoinis at the crease and both partnered for 49 runs between them.
Dwarshuis came back into the attack and broke the partnership as he removed Maddinson (16).
Stoinis and Glenn Maxwell took the Stars' score past 100 run mark. In the 12th over Melbourne Stars suffered a big blow as Tom Curran dismissed well-settled Stoinis (62).
Nick Larkin arrived at the crease, as Stars needed 38 runs in the last 14 balls. The side lost the momentum in the final and were bundled out on 125 overs after dismissals of Larkin (3) and Maxwell (12).
Earlier after being put in to bat first, Sixers had a bad start as they lost Daniel Hughes (14) and Josh Philippe (10) in the fifth over.
However, James Vince and Moises Henriques stabilized Sixers' innings. The duo put on a 114 runs partnership for the third wicket.
Daniel Worrall dismissed Henriques on 72 runs in the 14th over, reducing the Sixers to 140-4. Vince and Tom Curran took the side to a score of 143 runs. Vince played a fine knock and remained not out on 41 runs. (ANI)