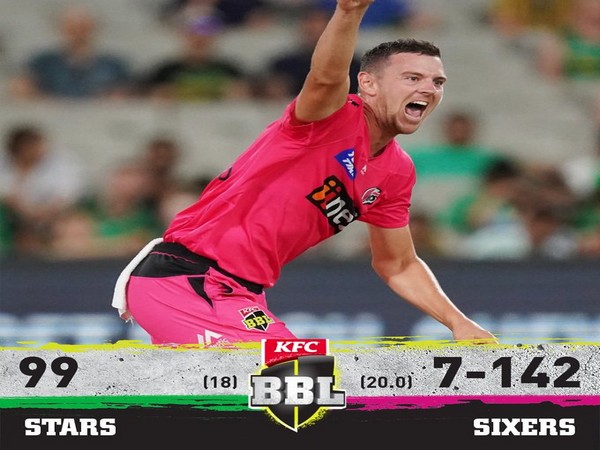 With this win, Sydney Sixers have qualified for the finals of the BBL.
Chasing 142, Stars lost a flurry of wickets at the start of their innings reducing the side to 26-3. Marcus Stoinis, Nick Larkin, and Peter Handscomb were dismissed after making 5, 4, and 4 respectively. Stars were in deep trouble as Nathan Lyon dismissed Nic Maddinson (16) in eighth over.
Seb Gotch joined Glenn Maxwell for a brief period as Steve O'Keefe removed him in the ninth over. After adding five runs to the total, Maxwell too got out after playing a knock of 16 runs.
Wickets kept tumbling for the Stars and side was bundled out on 99, handing a 43 runs victory to the Sydney Sixers. Clint Hinchliffe was the only batsman that showed some character and remained not out on 25.
After being put in to bat first, Sydney Sixers' openers Josh Philippe and James Vince stitched a 47 runs partnership for the first wicket. Adam Zampa dismissed Vince (12) in the seventh over of the innings. In next over, Philippe too got out after playing a knock of 34 runs off 28 balls, reducing the side to 54-2.
However, Steven Smith and Moises Henriques put on 4o runs stand for the third wicket. Sixers suffered two blows as the side lost Henriques (16) and Smith (24) in consecutive overs. Sixers were in a spot of bother after Daniel Hughes, Sean Abbott, and Ben Dwarshuis got out cheaply.
Hughes, Abbott, and Dwarshuis were dismissed after playing knocks of 3, 7 and 2 runs respectively. Jordan Silk's knock of 25 runs took the side to 142/7 in their full quota of 20 overs. (ANI)