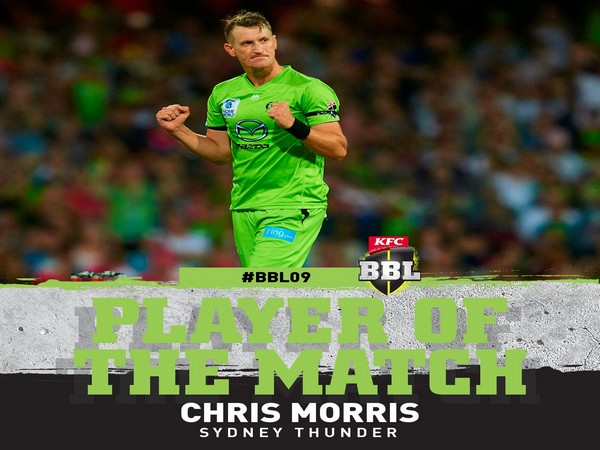 Chasing 77 runs, Thunder did not start well and lost Alex Hales (0) in the first over of the innings.
Skipper Callum Ferguson then joined Usman Khawaja for a partnership of 20 runs.
Daniel Sams arrived in the middle after the dismissal of Khawaja (13). Sams and Ferguson partnered for 8 runs before the rain came down.
After being put in to bat first, Sixers had the worst start possible start as they lost their first wicket in the first over when Daniel Hughes was run out by Chris Morris on a duck.
The misery continued for the Sixers as the lost Josh Philippe and Moises Henriques in quick succession, reducing the side to 6-3. Philippe (1) was dismissed by Gurinder Sandhu while Henriques (1) was removed by Morris.
James Vince (5), Jordan Silk (5), and Tom Curran (8) had a brief stay in middle. Curran was run out in the eighth over.
Justin Avendano and Ben Dwarshuis then had a partnership of 45 runs. However, in 15th over Daniel Sams dismissed Dwarshuis (19). In the same over Avendano got out after scoring 28 runs. The Sixers were bundled out for 76 in 16th over.
Sydney Thunder's Chris Morris, who took two wickets and gave away just 12 runs, was adjudged the player of the match. (ANI)