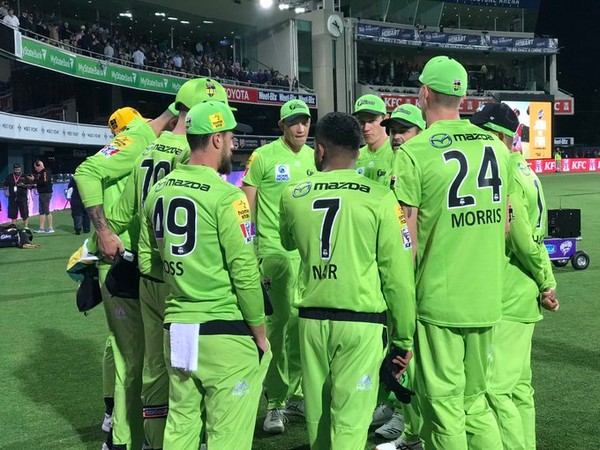 Sydney [Australia], Jan 31 (ANI): Sydney Thunder opted for the same team for the knockout clash as the one which played against Hobart Hurricanes in the eliminator.

Thunder made no changes in their 13-player squad for the knockout against Adelaide Strikers at Adelaide Oval on Saturday, February 1.
Thunder coach Shane Bond described the performance his team produced to win the elimination against the Hobart Hurricanes at Blundstone Arena is the effort he's been wanting all summer.
Thunder defeated the Hurricanes by 57 runs to progress to the Knockout. Alex Hales scored 60 off 37 deliveries while Usman Khawaja smashed 54 off 34 balls. Their batting provided the foundation for Thunder to finish its 20-overs at 197/5.
"We finally put together a complete performance. You want to do it in the critical games, and to produce it in the first final is awesome," Bond said.
"It gives me a lot of confidence going to Adelaide. While it's going to be tough, we know if we can repeat something like [Hobart] it'll be brilliant," he added.
Thunder squad against Adelaide Strikers: Callum Ferguson (C), Liam Bowe, Jonathan Cook, Brendan Doggett, Alex Hales, Usman Khawaja, Jay Lenton, Nathan McAndrew, Chris Morris, Arjun Nair, Alex Ross, Daniel Sams, and Chris Tremain. (ANI)