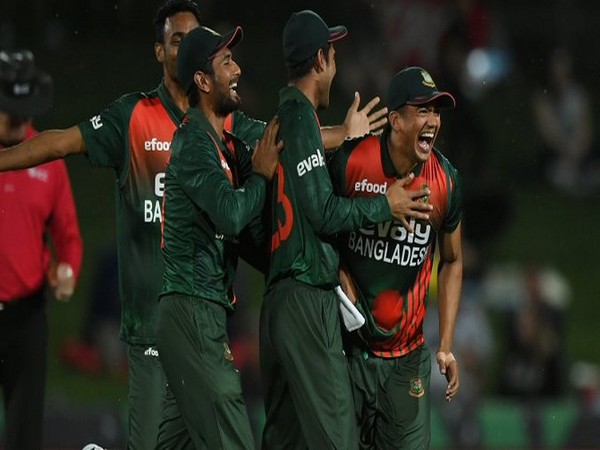 Dubai [UAE], October 13 (ANI): Group B looks set to be hotly contested in the first round of the ICC Men's T20 World Cup 2021 as Bangladesh, Oman, Papua New Guinea and Scotland battle it out to qualify for the Super 12.

The teams will play each other once in a round-robin format from October 17-21, with the top two advancing into the next stage.
Oman has a home advantage in just their second ICC Men's T20 World Cup, with all the Group B matches to be played at the Oman Cricket Academy Ground in Al Amerat.

The hosts earned their place after coming through the ICC Men's T20 World Cup Qualifier 2019, as did Scotland and Papua New Guinea - who will be playing in their first World Cup in any format.

Bangladesh qualified by virtue of its world ranking and entered as favourites to top the group. Whoever does so will join Afghanistan, India, New Zealand, Pakistan and the Group A runners-up in Group 2 at the Super 12 stage.

The team finishing second in Group B will meet Australia, England, South Africa, reigning champions West Indies and the Group A winners in Group 1. Ever-presents at the ICC Men's T20 World Cup, Bangladesh have not yet topped their performance in the very first edition in 2007 when they reached the Super 8s stage.
Hosting the tournament in 2014 did not bring a change in fortunes but a squad containing a promising mixture of youth and experience enter in excellent form this time around following an impressive sequence of series wins.
Victory over Ireland announced Oman's arrival on the ICC Men's T20 World Cup scene in style five years ago. And though they went on to fall at the first hurdle, a combination of steady improvements since and playing on home soil give Oman reasons to believe they can advance further on this occasion.
Following near-misses in their qualification attempts for the 2014 and 2016 ICC Men's T20 World Cups, Papua New Guinea left nothing to chance in the 2019 ICC T20 World Cup Qualifier and was the first team to seal their spot after topping Group A.
A five-wicket win over the Netherlands in the group stage proved decisive and though the Dutch got their own back by winning the final, Papua New Guinea was still able to celebrate qualifying for their first-ever ICC global tournament.
Following a seven-year hiatus, Scotland was back in ICC Men's T20 World Cup action in 2016 and sealed their return by winning the fifth-place play-off against Oman in the 2019 ICC T20 World Cup Qualifier.
The same qualifying tournament saw them defeat Group B rivals Papua New Guinea while a five-wicket win over Ireland in their opening warm-up match suggests this is a Scotland side arriving in good nick. (ANI)