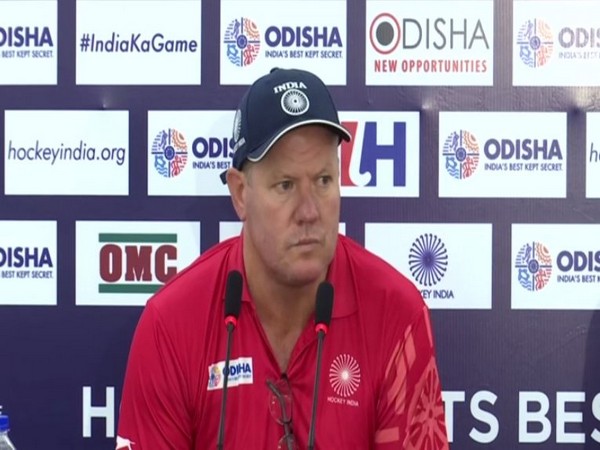 Bhubaneswar (Odisha) [India], Jan 18 (ANI): After trouncing the Netherlands 5-2 in the FIH Hockey Pro League, Indian coach Graham Reid said that side played "really well" in the third quarter as they scored two goals without conceding any.

"The third quarter was really good and it was a really good effort today. I'm very happy with the results but we don't get to carried away with that win. For me, it was a semifinal today and tomorrow will be a final," Reid told reporters in the post-match conference here.
Gurjant Singh, Rupinder Pal Singh, Mandeep Singh, and Lalit Upadhyay scored for India. Dragflicker Rupinder netted a brace for the team.
Playing against the world number three, the hosts dominated the game from the very first minute as Gurjant Singh opened the scoring for India before the completion of one minute.
"We had a very good start and of course every coach wants the start like that where the first press works and we get a goal. I thought we let them back in the game in the second quarter which we will look at it and try to learn from that," he added.
India remains on the attacking mode despite having the lead and tried to build the scoring opportunities.
In the 12th minute, Rupinder has created a two-goal cushion for India. Two minutes later Jip Janssen has got the Netherlands their first goal.
Meanwhile, the Dutch team earned three back-to-back penalty corners but failed to convert it to a goal.
The visitors ended the deadlock in the 28th minute and Jeroen Hertzberger scored the equaliser. The half-time scoreline read as 2-2.
In the third quarter, forward Mandeep netted the ball and gave the side much-needed relief with 3-2 lead. The hosts had control of the game and kept on penetrating the Dutch circle. Lalit's late goal doubled the lead for India in the 36th minute.
In the fourth quarter, the only goal scored was from the Rupinder's stick in the early minute. No other goals were scored in the match further and the full-time scoreline read as 5-2.
"The team environment is very good and we will try to improve with the coming games. Sometimes we have to work on our strengths rather than weakness," Rupinder said.
Lalit was awarded the player of the match for his stunning performance in the game. India will again take on the Netherlands at here on January 19. (ANI)