Tokyo Olympics: 13-year-old Sky Brown can't believe she will be competing at the Games 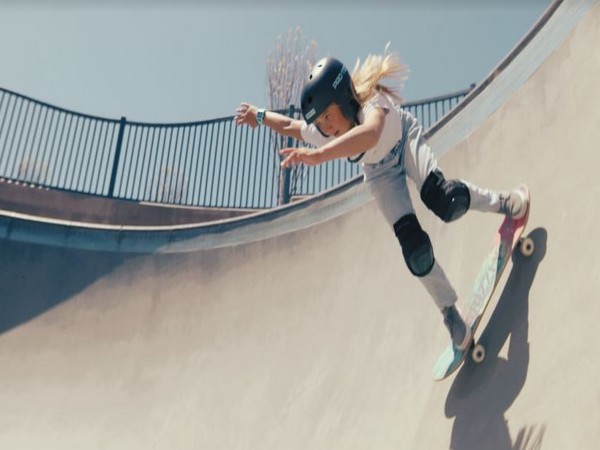 New Delhi [India], July 21 (ANI): Skateboarding will make its debut in the Tokyo Olympics along with four other sports. And 13-year-old Sky Brown cannot wait to go out and perform in the showpiece event for Team Great Britain. The youngest member of the contingent, Sky still cannot believe that she will be a part of the Olympics.

Speaking to ANI, Sky said her goal is to go out and enjoy herself and live the dream. In fact, she just wants to keep things simple and look to skate like she does every other day.
"It's crazy; I can't believe it. It's honestly more than I dreamed because I never really thought of it. I'm so happy, so excited and am just going to skate like I do every day and just enjoy my time," she said.
While athletes have spoken about the difficulties in training for the showpiece event due to COVID-19, Sky says the fact that one can skate anywhere was a big help in preparing her for the showpiece event.
"It actually hasn't been that bad. Some skateboard areas closed and stuff -- some of my favourites closed and that was a bummer -- but like I have said skateboarding can be done anywhere whenever you want. You can practice on flat ground, you can go upstairs, you can use empty swimming pools, and it's really cool. That's what I love about skateboarding, you can do it anywhere you want," she smiled.
For a 13-year-old to compete against the best in the business isn't easy, but for Sky, her father is her inspiration and she loved his skateboard.
"Well, I don't know -- my dad skated -- he built a backyard mini-around and my skateboard was my favourite toy and my dad's skateboard was my favourite toy, so I would play around all day on it, go to the supermarket with it and go everywhere with it -- and I don't know, I guess my dad really inspired me to it. When he did it, it looked so super cool and super fun and I wanted to do it - it looked really fun!" she explained.
Life for Sky is obviously not like other kids going to school, studying and returning home to play with friends. Speaking ahead of the launch of 'Reaching the Sky' on discovery+ which is streaming now in India, the athlete said she feels super lucky and thankful.
"I feel really lucky. I am super thankful. It has also made me a better person. I am having the best life ever and it is also making me want to give back. It's really cool, it has made me a better person. I mean I don't think it's hard at all. I mean I am just enjoying my time, trying to get better. Honestly, it's just fun," she pointed.
Throwing light on when she decided to go pro, Sky said: "I never really thought I wanted to go pro. I was just playing and getting better. I was skating with my dad, my friends and my brother and just playing. Just trying to do new tricks and I guess that got me better and turned me pro. I never really thought... I mean, I thought it [competing at the Olympics] would be cool but, I was just having fun."
The kid also explained how she decided to join Team GB. "I wanted to do Olympics really bad when I first heard they were going to do Olympic skateboarding, but my parents didn't want me to. They thought it was going to be too much pressure and competition. But Team GB skateboarding DM'd us and texted us and Facetimed us and said, 'Just get out there. There's no pressure. You can quit anytime.' I feel like the UK is very relaxed and that's why we thought the UK was better and that's why we did it. I begged my parents, they still said no but I begged them and begged them and then they said okay, yes," she revealed.
Sky is also excited that skateboarding will make its debut at the Games. "I think the whole world will see it and is going to want to do it. I think skateboarding has definitely grown but I think it's going get bigger and bigger after it's been in the Olympics. I am excited to see what happens," she signed off. (ANI)