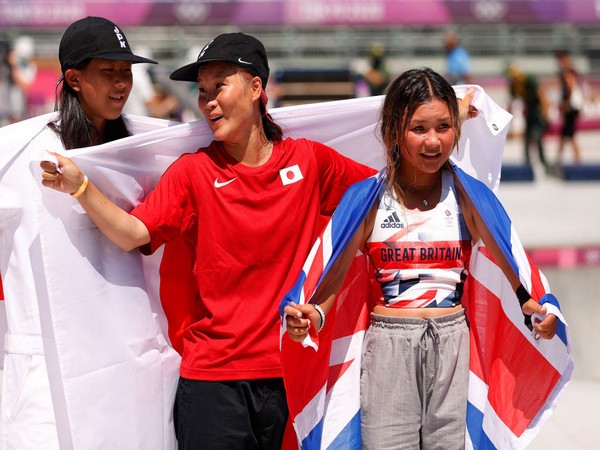 Sakura Yosozumi won gold in the women's park skateboarding competition. The 19-year-old skateboarding phenom clinched victory after her sensational performance in Round 1 where she scored 60.09.
Meanwhile, 12-year-old Japanese skateboarder Kokona Hiraki took silver after scoring 59.04, just 1.05 points behind teammate Yosozumi.
The Japanese skateboarders could have swept the podium but 15-year-old Misugu Okamoto, who was leading the pack in the preliminaries, fell short in her three runs and placed fourth overall.
It was in the third attempt where Sky Brown finally nailed her run at 56.47 which put her back in podium position to clinch bronze. With this bronze Sky became the youngest medallist for Great Britain in the Summer Games.
Last month while speaking to ANI, Sky had said her goal was to go out and enjoy herself and live the dream. In fact, she just wanted to keep things simple and look to skate like she does every other day.
"It's crazy; I can't believe it. It's honestly more than I dreamed because I never really thought of it. I'm so happy, so excited, and am just going to skate like I do every day and just enjoy my time," she had said. (ANI)