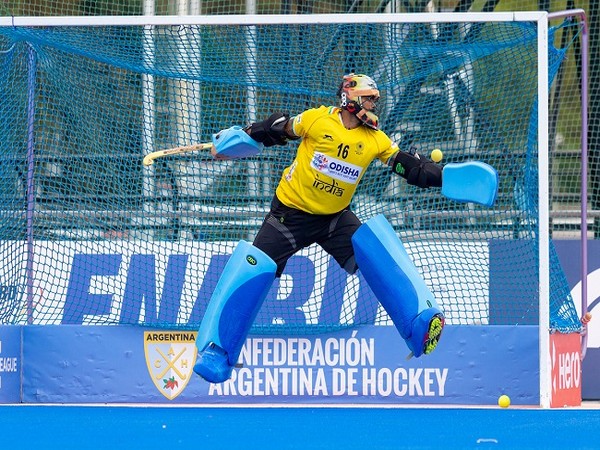 Bengaluru (Karnataka) [India], June 8 (ANI): Indian men's hockey team goalkeeper Krishan B Pathak, who has played 50 matches for the national side, said that he is always in sync with the plans made by the defenders during every match.

The 24-year-old also said the coordination between the defenders and the goalkeeper is very crucial for the defense line of the team.
"There might be only one goalkeeper on the pitch, but he is definitely not alone. I keep speaking to the defenders about their plans and ensure that I am in sync with them," said Krishan.
"If I can coordinate well with the defenders, then we will definitely have a strong defence line and make sure that we don't concede any easy goal. We practice coordination during our training sessions as well," he added.
While speaking about the Indian team's preparations for the Olympics, Krishan said that the team is carrying out high-intensity practice sessions at the moment.
"The Olympics is not very far away and therefore we are all putting in everything we have in every practice session. The coaches have devised high-intensity practice sessions for us, and we are enjoying each of those sessions," the goalkeeper said.
"We have been playing well as a group for a few years and we want to make sure that we play to our full potential at the quadrennial Games. It's going to be a big challenge for us, but we are definitely up for the challenge in Tokyo," he added.
Krishan said the Indian team will be aiming for nothing short of a medal at the Olympics.
"We have played really well against the top teams in the last few years. We have shown our mettle in the FIH Hockey Pro League as well. All the players are very confident about their games and are very determined to make history for India," said Krishan.
"We have progressed well as a team and the time has come for us to apply our skills to the best of our abilities and execute our plans properly. We are aiming for nothing short of a medal and we believe that we can win a medal at the Olympics this year," he signed off. (ANI)