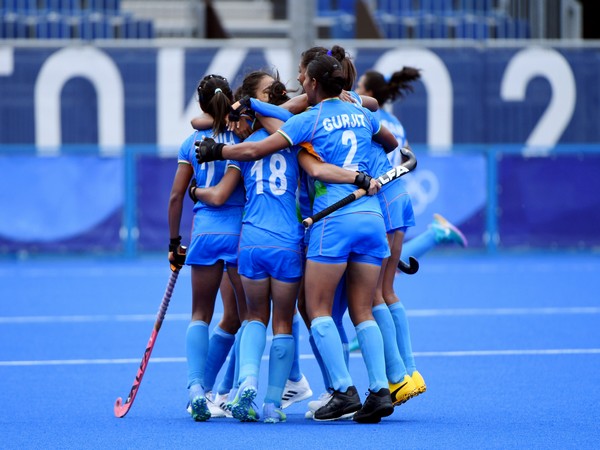 New Delhi [India], August 2 (ANI): Wishes came pouring from all around the sporting community after the Indian women's hockey team reached their maiden semis at the Olympics. The Women in Blue defeated Australia 1-0 at Oi Hockey Stadium in Tokyo on Monday.

In what comes as the greatest moment for women's hockey in India, Gurjit Kaur scored the lone goal in the match during the first half through a penalty corner in a very tightly contested match.
"Yesterday the men's hockey team, today the women's hockey team... Absolutely loving it. Well done to the women's team for making it to the #Olympics semi-finals for the first time ever! The whole nation is behind you!" Sachin Tendulkar tweeted.
Indian women's cricket team opener Shafali Verma also took to Twitter and wrote: "This is just brilliant from @TheHockeyIndia! Well done girls! @imranirampal! Girls love #OlympicGames .. and congratulations and best wishes to the Men's team too .. they won a great game too!"
India's first medalist in Tokyo 2020, Saikhom Mirabai Chanu, also congratulated the team, "What a stunning victory by Indian Women's Hockey Team over Australia."
Indian men's hockey legend Dhanraj Pillay also rallied behind the Women in Blue as he wrote: "This win against #Aus Showed what Indian women are capable of. A step away from getting a medal & a giant leap of faith.#hockey Applause to the entire team & the coaching staff.India is proud of you all & every Indian is celebrating this victory. Good luck for semis. Believe in Ur self."
Another Indian hockey great, Sardar Singh, showered praise on the team after the girls beat World No. 2 Australia. "What a remarkable way to make your mark in history! The #TeamIndia women's hockey team persevered & kept their 1-0 lead to make it to the Olympic semi-finals for the FIRST time after beating World #2 Australia. The girls have been spectacular & the whole nation is behind you."
Earlier on Sunday, the men's hockey team also reached the semi-finals after Manpreet Singh's side defeated Great Britain 3-1. (ANI)