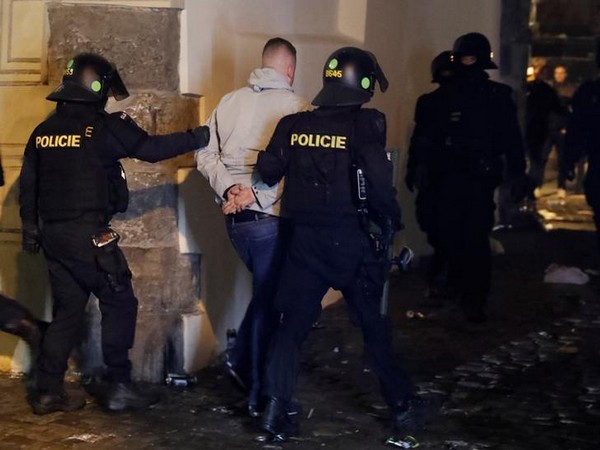 Prague [Czech Republic], Oct 12 (ANI): Twenty people have been arrested as England supporters clashed with Prague police as the Three Lions played their Euro 2020 qualifying match against the hosts at the Sinobo Stadium here.

The traveling supporters had set up base in a square in the Old Town section in Prague and they went on with their aggressive display which prompted the police to come into action, Goal.com reported.
A warning was also given by the police, but once it was ignored, the authorities came down at the square wearing the riot gear. The visiting fans responded by throwing bottles at the police, and the latter then responded by launching stun grenades at them.
There were concerns before the game that a riot can take place and Prague's reputation as a party town could potentially lead to problems with England's crowd.
There has been no statement yet as to whether the arrested had tickets to the game or not.
The Czech Republic stunned England 2-1 in the ongoing Euro 2020 qualifying tournament on Friday (local time).
With this win, the Czech Republic has moved level on points with England in the group. England had not lost either a World Cup or European Championship qualifier since 2009.
England was able to register an early goal. Skipper Harry Kane converted the penalty in the fifth minute to give the Three Lions a 1-0 lead.
Raheem Sterling's run was ended by Lukas Masopust's clumsy trip and as a result, England was awarded a penalty.
The Czech Republic did not have to wait a long time for the equalising goal as Jakub Brabec netted the ball in the 9th minute, bringing the scoreline to 1-1.
Both teams kept on making attacking moves in the first half, but they did not manage to register more goals and as a result, at the half-time mark, the scoreline remained 1-1.
In the second half, England got a chance in the 57th minute to take the lead. but Sterling was denied by Czech Republic's goalkeeper Tomas Vaclik.
Zdenek Ondrasek defied the odds and registered a goal for the Czech Republic in the 85th minute to give the side a 2-1 lead.
Before this match, England had a perfect record in their group.
On the other hand, with four wins from their last five qualifiers, the Czech Republic is in good shape to finish in the top two. (ANI)