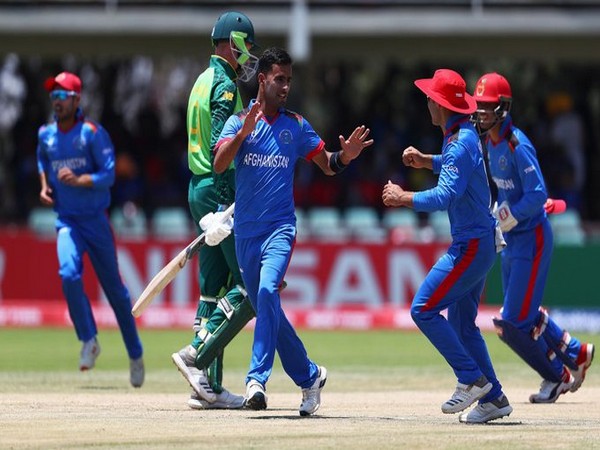 Kimberley [South Africa], Jan 17 (ANI): Despite skipper Bryce Parsons' gutsy 40, South Africa were bundled for a paltry 129, a target Afghanistan chased down with 25 overs to spare.

Shafiqullah Ghafari was adjudged the player of the match for his splendid bowling performance. He took six wickets and gave away just 15 runs
Chasing 130, Afghanistan got off to a poor start as skipper Farhan Zakhil got out after scoring 11 runs in the fourth over.
But half-centuries by Ibrahim Zadran (52) and Imran Mir (57) anchored Afghanistan's chase. Imran, in particular, was excellent as he smashed 57 in just 48 balls.
In the end, it was a comfortable victory for Afghanistan as they chased down the target in 25 overs.
Earlier after opting to bat first, South Africa had a worst possible start as they lost both the openers in the third over. Afghanistan's bowlers dismissed four Proteas batsmen for a duck.
Skipper Parsons played a crucial knock of 40 runs but didn't get any support from the other end.
Proteas kept on losing wickets at regular intervals and were soon found reeling on 90 for eight.
Gerald Coetzee saved South Africa from embarrassment by playing a knock of 39 runs in the end. Shafiqullah Ghafari ended Coetzee resistance and Proteas were bowled out at 129 in the 30th over. (ANI)