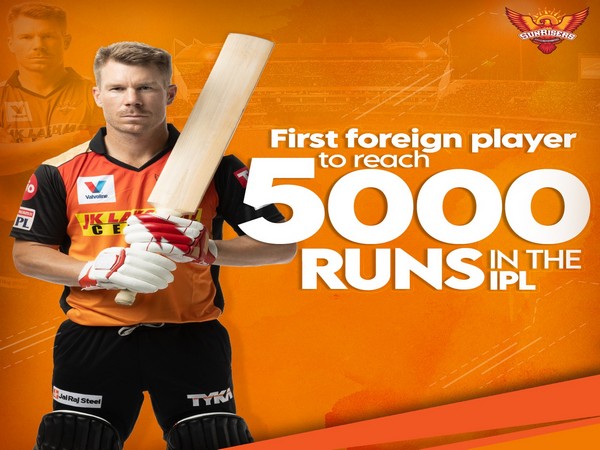 Warner touched the landmark figure during the team's clash against Kolkata Knight Riders (KKR). Overall, Warner has become the fourth batsmen to score more than 5000 runs in the league.
Other batsmen to have more than 5000 runs under their belt are Virat Kohli (5759), Suresh Raina (5368), and Rohit Sharma (5149). However, Warner is the quickest batsmen of them all as he reached the number in his 135th innings.
Earlier, KKR put a respectable total of 163 runs on the board against SRH. KKR skipper Eoin Morgan and Dinesh Karthik played crucial knocks of 34 and 29* respectively in the end to help the team set a target of 164 runs for the Warner-led side.
After being asked to bat first, KKR got off to a good start with openers Shubman Gill and Rahul Tripathi scoring regular boundaries. The duo formed a 48-run partnership before Thangarasu Natarajan, in the sixth over, dismissed Tripathi.
In the 12th over, Rashid Khan removed Gill (36) and in the next over, Nitish Rana was also sent back to the pavilion by Vijay Shankar which reduced KKR to 88/3.
Morgan and Andre Russell were the next batsmen and helped KKR get past the 100-run mark. Both added 17 runs on the board before Russell gave away an easy catch to Shankar off Natarajan's delivery in the 15th over. Karthik then took the field.
Morgan and Karthik played brilliantly and guided KKR to a decent total. Morgan scored 16 runs in the last over before getting out on the final delivery of the innings. (ANI)