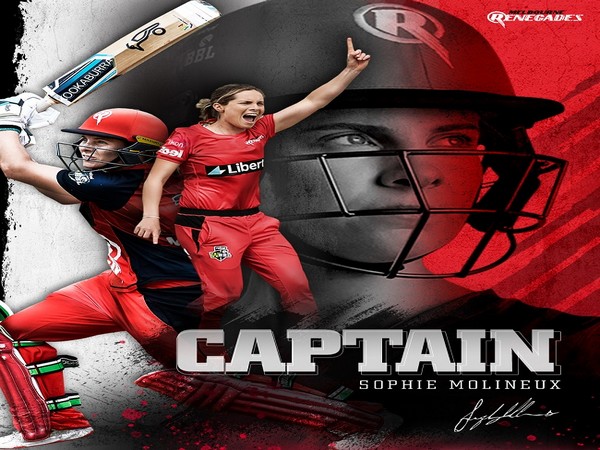 The Australian all-rounder and two-time ICC T20 World Cup winner has been with the Renegades since the inception of the WBBL.
At 23 years of age, Molineux has become the youngest Renegades player to be appointed as captain as she takes over the role from Amy Satterthwaite.
Molineux has played 74 matches in the tournament and said she has benefitted from learning from some accomplished captains throughout her career.
"It's a real honour to be appointed captain of a club I love so much and follow in the footsteps of some high-quality leaders that I look up to," the Melbourne Renegades website quoted Molineux as saying.
"Amy Satterthwaite has had a massive influence on the group and on me personally. Her wealth of knowledge and ability to stay composed is what I've always admired. Jess Duffin is such a competitor and leads by example and I've also had the privilege of playing under Meg Lanning in the Victorian and Australian teams.
"I am really excited to be able to take what I've learnt from each of them, combine it with how I approach the game and continue to grow and learn along the way," she added.
Head coach Simon Helmot said Molineux has the right combination of cricket knowledge and affinity with the playing group.
"Sophie has fantastic relationships within the squad. She's tactically astute, trusted and highly respected across the playing group," Helmot said.
"She's had an excellent apprenticeship working under some great captains, including Amy who has helped nurture so much of our young talent.
"That grounding under such leadership will have Sophie well prepared, we're excited to see this next phase in her career and we'll support her along the way. We look forward to the start of a sustained period of success for the club under Sophie's leadership," he added. (ANI)