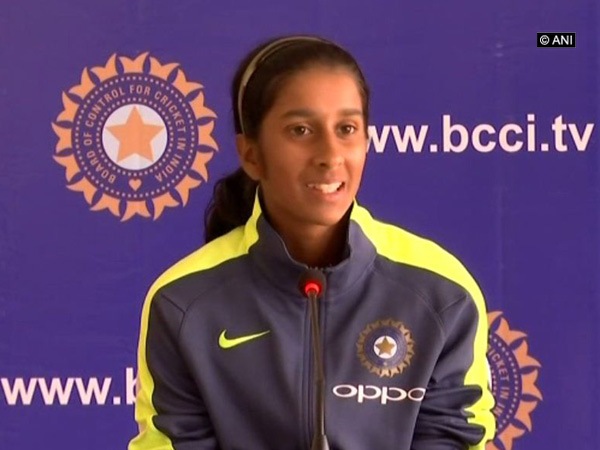 Dubai [UAE], Jan 22 (ANI): India batter Jemimah Rodrigues has said that the side will have good match practice before the ICC T20I World Cup as they are going to play a tri-series in Australia.

"I think it's [preparations] going pretty well. We have got a good couple of matches. Now we'll be going to Australia and we will have the tri-series. So, I think we have good match practice before the main tournament," International Cricket Council (ICC) quoted the world number four T20I batswoman as saying.
"And yes, of course, I have been working on some particular areas [of improvement] in my batting... So, yeah, it's been going pretty well," she added.
India, currently ranked at the fourth spot in ICC T20I team rankings, will face the defending champions and world number one Australia in their first match of the tournament.
Commenting on the same, the 19-year-old youngster said India have to do well against them.
"Aussies are naturally dominating and if you hold back a bit, they will sit on your head and not let you come up. So if you want to face them or do well against them, you got to bring your best game. You got to raise your standards," Rodrigues said.
Rodrigues has played 34 T20Is in which she had scored 763 runs with a strike rate of 114.73.
"As a young kid, I have always dreamt about playing the World Cup and not just playing, but doing well. And that too in packed stadiums. And this hasn't happened to me so far, I wasn't there in the 2017 World Cup. I can't put it in words, how important it will be for me to be a part of the Indian team that plays in a World Cup final. It's quite exciting. I'm really looking forward to it," Rodrigues said.
Harmanpreet Kaur will lead the team in the elite competition while Smriti Mandhana will be her deputy.
India squad: Harmanpreet Kaur (captain), Smriti Mandhana (vice-captain), Shafali Verma, Jemimah Rodrigues, Harleen Deol, Deepti Sharma, Veda Krishnamurthy, Richa Ghosh, Tania Bhatia (wicket-keeper), Poonam Yadav, Radha Yadav, Rajeshwari Gayakwad, Shikha Pandey, Pooja Vastrakar, Arundhati Reddy.
In the opening match of the World Cup, the hosts Australia will take on India at Sydney Showground
on February 21. (ANI)