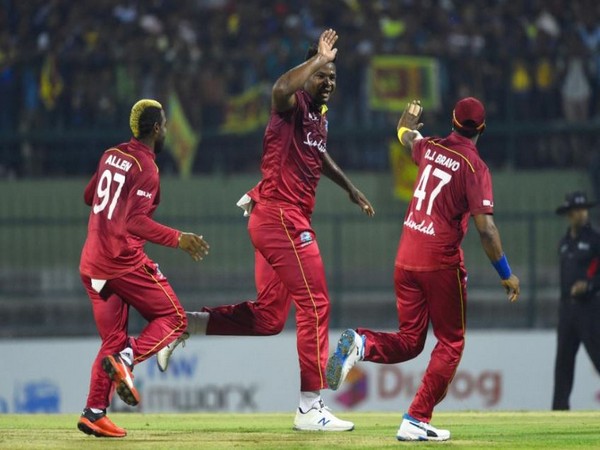 With this victory, West Indies have taken a 1-0 lead in the two-match T20I series.
Chasing a target of 197 runs, Sri Lanka did not witness a good start as Oshane Thomas took three wickets in the second over of the innings. Thomas did not allow Sri Lanka batsmen to settle down as he picked another two wickets to put the hosts under immense pressure.
With Thomas clinching five wickets under six overs, Sri Lanka were reduced to 56/5. Wanindu Hasaranga and Kusal Perera then took the charge of the chase and provided their side with some momentum and the latter completed his half-century.
Rovman Powell then broke the partnership as he got hold of Hasaranga (44) in the 16th over. In the next over, Andre Russell removed Perera (66). Sri Lanka kept losing their wickets and were all out on 171 runs.
Earlier after opting to bat first, West Indies got off to a brilliant start as Brandon King and Lendl Simmons struck regular boundaries. Lakshan Sandakan handed Sri Lanka with their first breakthrough as he dismissed King (33). Nicholas Pooran then came out to bat but failed to leave a mark as he gave away his wicket after scoring 14 runs.
Simmons, who completed his half-century, was then joined by Andre Russell on the field. The duo played a fast-paced innings and thrashed Sri Lanka bowlers. Russell played a knock of 35 runs off just 14 balls before Lasith Malinga sent him back to the pavilion.
Simmons' unbeaten knock of 67 runs helped West Indies put up a massive total on the board.
The second T20I will be played on March 6. (ANI)