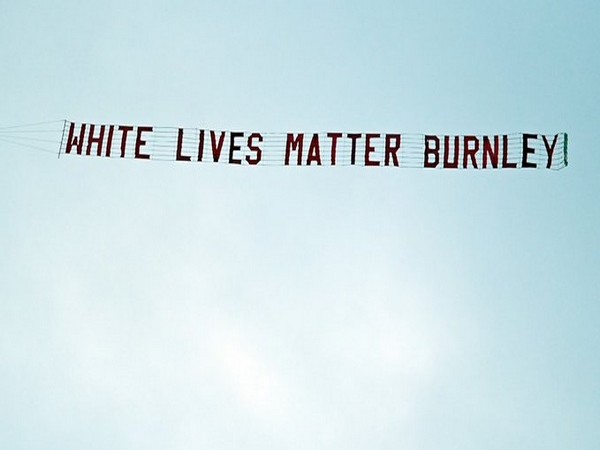 Manchester [UK], June 23 (ANI): 'White Lives Matter Burnley' banner was flown by a small plane over the Etihad Stadium on Monday (local time) during the Premier League match between Manchester City and Burnley.

As soon as the match started between both the sides, a plane was spotted overhead carrying a banner that read "White Lives Matter Burnley", Goal.com reported.
The display came just moments after the players on the pitch finished kneeling to show support for the 'Black Lives Matter' movement and there has been no confirmation as to who paid for the banner to be displayed.
Since the resumption of Premier League, all 20 top-flight clubs have been taking a knee to show their support with the 'Black Lives Matter' movement and have also replaced their names with the message 'Black Lives Matter' on their jerseys.
After seeing this banner of 'White Lives Matter', Burnley condemned the act, saying this is not what the club is all about.
"We wish to make it clear that those responsible are not welcome at Turf Moor. This, in no way, represents what Burnley Football Club stands for and we will work fully with the authorities to identify those responsible and issue lifetime bans. The club has a proud record of working with all genders, religions, and faiths through its award-winning Community scheme, and stands against racism of any kind," Burnley FC said in an official statement.
"We are fully behind the Premier League's 'Black Lives Matter' initiative and, in line with all other Premier League games undertaken since Project Restart, our players and football staff willingly took the knee at kick-off at Manchester City. We apologise unreservedly to the Premier League, to Manchester City, and to all those helping to promote Black Lives Matter," the statement added.
The 'Black Lives Matter' movement has gained momentum after an African-American man named George Floyd passed away after a viral video indicated that a police officer identified as Derek Chauvin pressed his knee on the neck of Floyd.
In the match between Manchester City and Burnley, the former ended up winning the match 5-0. (ANI)