WI vs SL: Going ahead, will look to carry the game deep, says Lewis 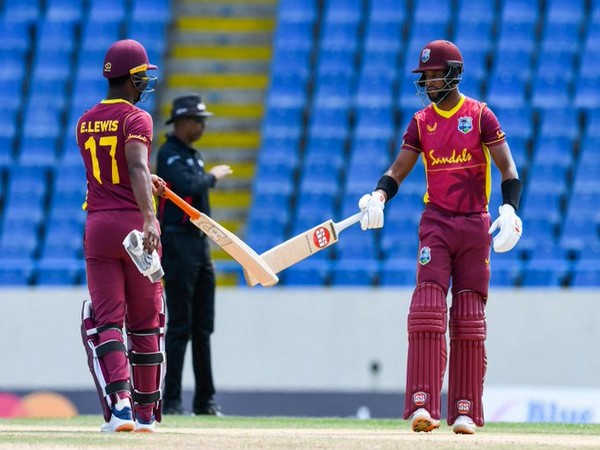 St John's [Antigua], March 13 (ANI): After playing a match-winning knock of 103 runs in the second ODI against Sri Lanka, West Indies opening batsman Evin Lewis said he would look to finish off games for his side going ahead.

Evin Lewis and Shai Hope played knocks of 103 and 84 respectively as West Indies defeated Sri Lanka by five wickets in the second ODI of the three-match series on Saturday here at the Sir Vivian Richards Stadium. With this win, the hosts have gained an unassailable 2-0 lead in the series.
"I feel very proud. I totally back myself and my ability. I look for a good start in the powerplay and push on from there. Playing the 50 over games last month helped me. The confidence was there, so I just tried to execute," said Lewis after the conclusion of the second ODI.
"This wicket is probably one of the best wickets in Antigua, as batters you got to love it. I could have probably carried the game to the end. I tried to take on the bowler and got out. From the next game I will look to carry the game deep," he added.
Chasing 274, Windies got off to a fantastic start as openers Lewis and Hope put on 192 runs for the first wicket and the duo finished the match with this start and Sri Lanka bowlers had no answers for their onslaught.
Sri Lanka did manage to take five wickets, but in the end, Nicholas Pooran (35) and Jason Holder (2) took the hosts over the line by five wickets with two balls to spare.
Earlier, Danushka Gunathilaka played a knock of 96 runs as Sri Lanka posted a total of 273/8 in the allotted fifty overs. In the final five overs, Sri Lanka added 51 more runs to their total and the side posted a score of more than the 270-run mark. For West Indies, Jason Mohammed returned with three wickets.
West Indies and Sri Lanka will now lock horns in the third and final ODI on Sunday. (ANI)