Will never stop my fight against racism: Willian 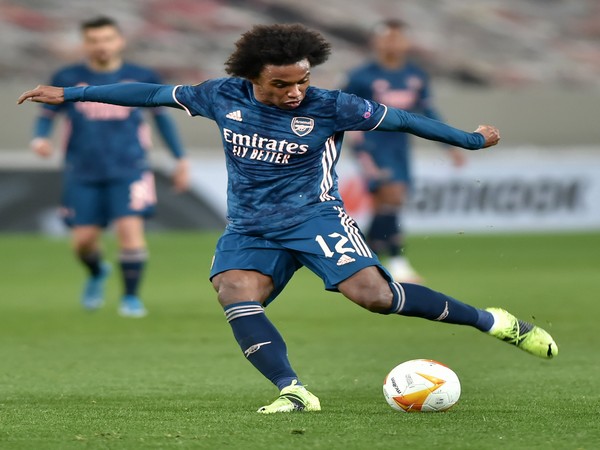 London [UK], April 7 (ANI): Arsenal's Willian said that he will never stop his fight against racism while revealing that he feels like deleting his social media accounts when he sees such messages.

"Well because we see it day by day, week by week. I was in that situation one month ago, and it was very difficult for me because I have a lot of things on my phone and I saw a lot of horrible words against my family for example," the club's official website quoted Willian as saying.
"After that, I said to myself, 'Enough is enough, I have to try something' - to take action against racism and online abuse. I am proud because the club is doing that, they are helping us a lot and I will never stop my fight against racism," he added.
When asked about how those messages make him feel, Willian said: "I feel that straight away I want to delete my social media accounts. I have seen some people [do that] because of the racism and the abuse and straight away I want to do that, but when you think and take a few minutes and relax a little bit more... but the first action is to delete straight away!"
In an attempt to curb the menace of social media abuse, Premier League club Arsenal on March 30 announced a new campaign, named #StopOnlineAbuse.
"Social media is one of the ways our supporters across the world can feel closer to the club and our players, but across football and beyond we've seen an online world poisoned by hateful, racist and discriminatory words. We cannot underestimate the impact abuse has on individuals and the recent spate of abuse needs to be a wake-up call," the club had said in a statement.
"We all need to work together to drive out this behaviour. This includes clubs, governing bodies, fans, media and politicians; but requires the help and commitment of social media companies. We know that we have a crucial role to play in bringing about real change. We are therefore outlining below our #StopOnlineAbuse action plan to ensure we are fulfilling our responsibility to protect our players and our diverse, global family and stamp out online abuse," it had added.
The club had said it has strengthened the internal procedures with the creation of a task force to give emotional and practical support to its players.
Offering advice to younger players who have experienced racism, Willian said: "What I can say is that the advice is to share [with the authorities], put on social media and to never have fear to speak about it because these people have to pay for that. I don't know why they do that, we want to know that so the advice is that. We have to speak out, we have to share on our social media and that's it." (ANI)