Would like to bat a bit longer: Steve Smith 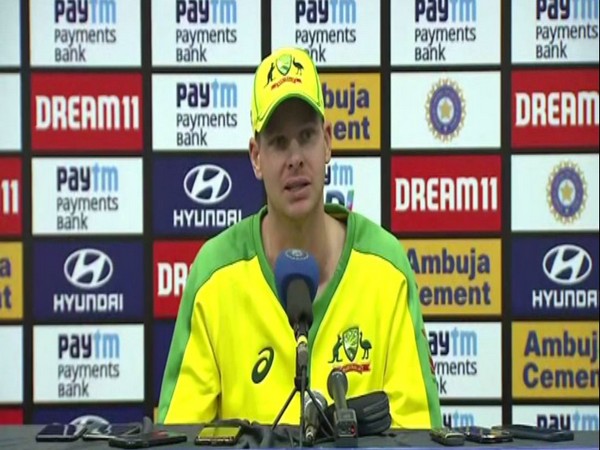 Rajkot (Gujarat) [India], Jan 17 (ANI): After facing a 36-run defeat at the hands of India in the second ODI, Australia batsman Steve Smith said he "would like to bat a bit longer" in the middle.

"It was nice to score a few more runs. I would have like to bat a bit longer and been there. Unfortunately, I tried to cut the ball and dragged it on. It was a pretty bad time we lost Carey in the same over. These things happen sometimes and you have to move on," Smith told reporters in the post-match conference here.
Chasing 341, Indian bowlers dismantled the Australian batting unit and bundled out the visitors at 304. The Kangaroos did not have the big opening stand as they lost David Warner in the fourth over after scoring 15 runs. Steve Smith joined skipper Aaron Finch and built a partnership of 62-run.
Ravindra Jadeja scalped the second wicket for India. Wicket-keeper KL Rahul whipped the bails off while Finch's foot was on the line. Finch departed after playing a knock of 33 runs.
Marnus Labuschagne and Smith tried to build the innings and added 96-run for the third wicket. The latter was picked by local boy Jadeja in the 31st over. Labuschagne, playing his second ODI, smashed 46 runs off 47 balls.
Alex Carey and Smith had a partnership of 42-run before the former was dismissed by leg-spinner Kuldeep Yadav. Carey added 18 runs to the scoreboard. In the same over, Smith too was picked by Yadav. Smith hammered 98 runs studded with nine fours and a six.
Smith praised Marnus Labuschagne, who played his first limited-overs innings, and said: "He has been in terrific form and batting beautifully".
"I think the way Marnus played in his first game, he had the courage to hit one over mid-off to Kuldeep early on. That shows he has got something in his batting. We know he has been in terrific form and batting beautifully. He is transferring into ODI cricket. He looked exceptionally good tonight. He hit the gaps and ran hard between the wickets and played some nice shots," said Smith.
With the win, India levelled the three-match series by 1-1. Both the teams will now face each other in the series decider in Bengaluru on January 19. (ANI)