WTC final: We are clear for the Final Day, says Dinesh Karthik 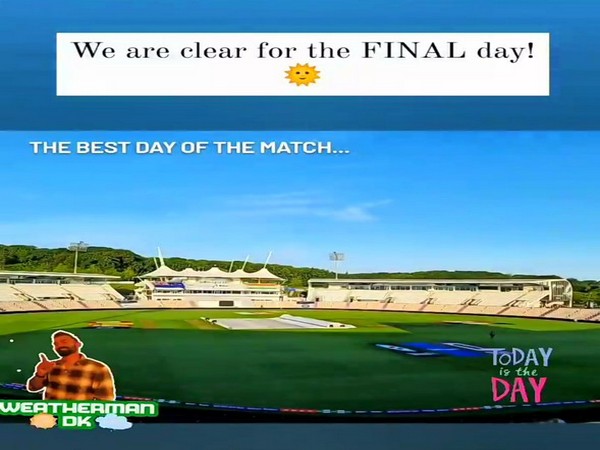 Southampton [UK], June 23 (ANI): In what comes as a huge boost going into the Reserve Day of the World Test Championship (WTC), pundit Dinesh Karthik has said there shouldn't be any rain interruption as it is expected to stay clear at the Ageas Bowl in Southampton on Wednesday.

Taking to Twitter, Karthik wrote: "We are clear for the FINAL Day! This has been the best weather so far I've been here. Final assignment for Weatherman DK #WTCFinal #WTC21final."
The first and fourth day of the summit clash was completely washed off due to rain while there have been quite a few rain interruptions otherwise as well.
In fact, former England skipper Kevin Pietersen had made his displeasure known at the constant rain interruptions and tweeted: "It pains me to say it, but a ONE OFF & incredibly important cricket game should NOT be played in the UK."
While the action has been top-class on the pitch, there was also some unruly behaviour from a section of the crowd on Tuesday that saw two fans being removed from the stands. They were said to have hurled racial abuse at the New Zealand players.
Back to the game, the match could come to a thrilling end with India skipper Virat Kohli and Cheteshwar Pujara at the crease going into the final day's play. India has a lead of 32 runs with eight wickets in the bag. (ANI)