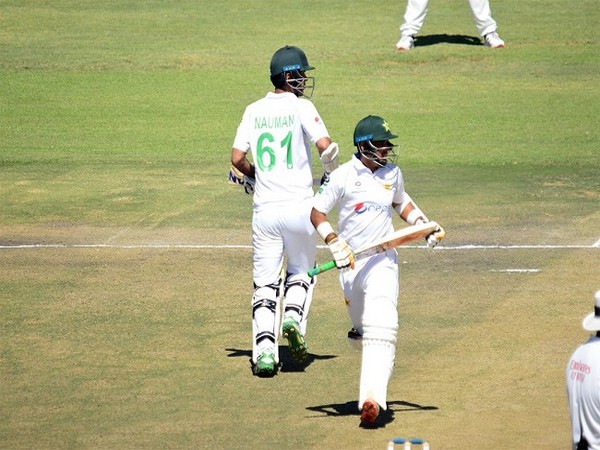 Harare [Zimbabawe], May 9 (ANI): Pakistan bowler Nauman Ali, who whacked five sixes against Zimbabwe on Saturday, had worked on his batting skills after the conclusion of the South Africa series earlier this year.

Nauman's counter-attacking 97 came in just 104 balls as he along with Abid Ali stitched a 169-run stand for the eighth wicket to help Pakistan maintain the driver's seat in the ongoing second Test against Zimbabwe.
0Zimbabwe were 52/4 and found themselves in a precarious position as they needed another 259 to avoid the follow-on and trailed Pakistan's 510 for eight (declared) by 458 runs.
Nauman smashed an electrifying 97. He posted his maiden half-century in 86 balls and then spanked Zimbabwe bowlers for boundaries to score his next 45 runs from 18 balls. Overall, he struck nine fours and five sixes.
Nauman rued the fact that he missed out a Test ton but was happy to help his side score some quick-fire runs on day two of the second Test.
"This is also my highest score in first-class cricket. I had put my all for the century but fell three runs short, I am still thankful to god for the 97. Abid gave me the confidence when I went out to bat as our plan was to play two sessions," said Nauman posted in a video by Pakistan Cricket on Twitter.
"After my fifty, I took the chances in order to score quick runs. Abid also guided me during the knock whenever I felt I was doing something wrong," he further said.
"After the South Africa series, I worked on my batting a lot along with my bowling. The coaching staff also helped me during the camp here prior to the start of the series," Nauman added.
Pakistan lost nightwatchman Sajid Khan (20 off 54) earlier in the day and Mohammad Rizwan followed him back to the pavilion after scoring 21. Hasan Ali was the next batsman to fall as Pakistan was 341 for seven.
Nauman was stumped after tea, which prompted Pakistan captain Babar Azam to declare the innings with a handsome score on the board.
Blessing Muzarabani's three wickets, which he had snared in the evening session on day one, made him standout on the bowling scoresheet, while Tendai Chisoro took two wickets.
Zimbabwe's woes amplified on the last ball of the second over as debutant Tabish Khan trapped Tarisai Musakanda in front of stumps. Kevin Kasuza fell to Hasan Ali once again as he edged a length delivery onto his leg-stump.
Zimbabwe captain Brendon Taylor was next to walk back, thanks to Shaheen Shah Afridi. Milton Shumba, sent in as a nightwatchman, was adjudged LBW as he padded off-spinner Sajid Khan, who picked up his first Test wicket.
Wicketkeeper-batsman Regis Chakabva was unbeaten on 28 from 71 balls and he was joined by Tendai Chisoro when stumps were drawn.
Zimbabwe, after having suffered a heavy loss by an innings and 116 runs in the first Test, will be eager to avoid another defeat by an innings margin when they resume their batting on Sunday. (ANI)