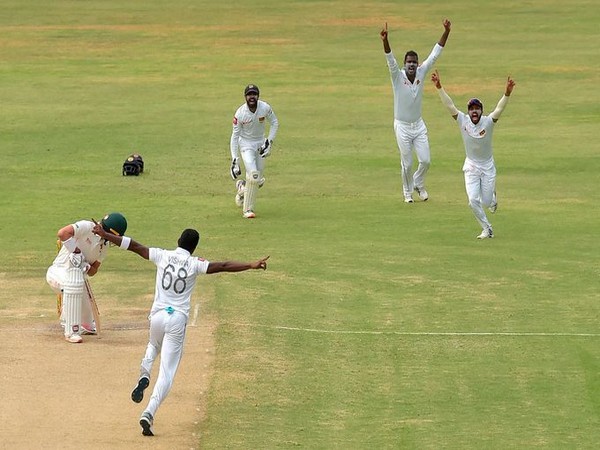 Harare [Zimbabwe], Jan 29 (ANI): Zimbabwe lead Sri Lanka by 175 runs after the conclusion of day three of the ongoing second Test on Wednesday here at the Harare Sports Club.

After adding just nine runs from the overnight score of 122/2 Sri Lanka lost Kusal Mendis (22). In the 65 over Sikandar Raza gave the second blow of the day to the visitor as he dismissed Dinesh Chandimal (6).
Angelo Mathew and Dhananjaya de Silva played cautiously and took the side past 200 runs mark. Mathew looked in good touch and brought up his half-century.
The duo put on 84 runs stand between them before Sikandar Raza came back in the attack and dismissed Silva (42). Mathew got out after playing a knock of 64 runs. Later in the innings, Sri Lanka suffered a collapse and were bundled out on 293 runs.
Zimbabwe's openers put on 32 runs for the first wicket in the second innings. Vishwa Fernando dismissed Craig Ervine (13) in the 12th over, reducing the side to 32-1.
Regis Chakabva then joined Prince Masvaure at the crease took the side past 50 runs. Chakabva remained not out 14 while Masvaure saw off the day unbeaten 26 and will resume their second innings from 62/1 on day four. (ANI)